An interview with Darth Vader - a T-Mobile Super-Hero Wannabe 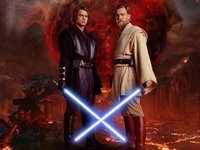 It's been a busy week at as we've been buried with interviews. But one interview in particular stands out. I had an applicant send his resume for my Super-Hero position - his resume caught me by surprise.

Picking myself up from the floor, I immediately reach for my T-Mobile Blackberry 7105t. A strange tingling shoots down my spine as I note the picture on the front display of my A700 – black uniform....light-sabre shining in the background. Could it be?

The rest is Super-Hero history.

As the phone rings, I clear my throat....."Kkhhhhhh (deep breathing), Greetings, this is Darth."

"Uh, yes, I'm calling regarding your resume. My name is Dennis Smith – I’m the Recruiting Manager at T-Mobile. However, I'm not sure I dialed the right number," I managed to squeak out.

"Of course, of course," Darth kindly replies. "I've been waiting for your call. I saw your blog last week and knew immediately that I was a fit...you mentioned needing Super-Heroes at T-Mobile."

"Ah, yes, I did, didn't I. Well, uh, you certainly would qualify for Super-Hero status in my books," I noted rather politely.

"I was a bit surprised," Darth shot back. "Your job description failed to mention anything about midi-chlorian concentrations. It's very unlikely that anybody with the credentials to attain Super-Hero status would have anything but enviable levels."

“Let me make sure I understand what you are saying,” Darth said, in a noticeably lower voice (the deep breathing also returns). “Your blog said, and I quote, “Ok Super Heros - it's time to come out of the closet! You are the few good men/women that we want. No more hiding behind closed fire-walls and secret organizations.”

“So here I am, Darth Vader. I’m ready for a career change – the force within me is strong and I’m ready to make a difference in an organization that believes in me. You said that Super-Heroes are on your radar screen. When do I start?”

“Well, Mr. Vader, sir, I do understand why you’d have an interest in T-Mobile. We are a global organization that desires to be the most admired electronics company in the world by 2012. And we’re doing Super-Human things every day to achieve that goal. If you join our ranks, you’ll rub elbows with other Super-Heroes, figuratively speaking, and will achieve success heretofore unknown to Emporer Palpatine.”

As the sound of a beaming lightsabre slices through the air, Darth fills his barrel chest with a deep breath. “I’m in,” he bellows. “So like I said, before, when do I start?”

As I fumble through the calendar, my racing mind can’t focus quickly enough to develop a coherent reply.

“Don’t worry about it,” Darth affirms. “As soon as I get the oil changed in the TIE Fighter, I’m at your door. For common starships, the jump to hyperspace involves a brief but violent acceleration to high relativistic speeds and then a leap beyond the lightspeed threshold by some unknown mechanism. But the TIE is not your common starship – we’ll be in hyperdrive and in Dallas in no time.”

"Are you ready to wage war on our competitors, Mr. Vader?" I reply.

"Right now I feel like I could take on the whole Empire myself," Vader quips. "But I will need some help. The force is with you young SmithWalker, but you are not a Jedi yet."

That’s my story and I’m sticking to it.

"There's no need to fear, Mr. Smith, Underdog is here!"

"Sure, Mr. Vader may be a big man - with an asthmatic condition and a deviated septum, but I too have had my share of heroic encounters with people like Riff Raff and Simon Bar Sinister."

"And of course, I'm a team player without an ego; afterall, I'm really just a humble, lovable Shoeshine Boy who happens to be a champion of justice."

"Mr. Smith, if you feel as if these qualifications meet your needs just sing out 'Oh where, oh where has my Underdog gone?' and I'll be in Dallas but without Vader's malice."