Why Every Single Possession Matters - #DoHardThings 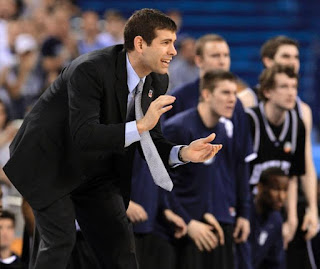 I'm a fan o' the man - the coach, Brad Stevens.  I've been a fan since his Butler days.  Amazing coach. An even more amazing story.

I first met Stevens at the DirectEmployers Conference in Indianapolis where his keynote emphasized "integrity" and a passion for living for something bigger than oneself. I stood in line to have my picture taken with him and I remember thinking, "Wow, this guy's a college coach and he's not much taller than me?"  : ) - he was also nice guy.  Intense, but nice.

In 1989 Butler University had 15 season ticket holders. 15.  I think our 2-A Van Alstyne Panthers had at least 16 that same year.  In 2000, Brad Stevens was a Marketing Associate at Eli Lilly making $44k/year.  In 2010, his Bulldogs, who could have been nicknamed "The Improbables," come within 3 inches of being the greatest basketball story ever told.  #BulldogNation swept the nation. Three years later, at the ripe 'ol age of 37 years, Stevens was tagged to become the new coach of the Boston Celtics.


Brad Stevens would have been an incredible Marketing guy had he opted to stay at Eli Lilly.  And he might have been an even better recruiter of talent in the corporate world.  Kyrie Irving believes Stevens wins because every single possession matters to him. Does that translate to recruiting?  You bet.  Every single requisition matters.  Every single candidate matters.  Every single hiring manager conversation - text message - phone call - InMail - matters.  And what matters most is the attention we give to every one of those process-steps. Tempted to cut corners?  Pffft.  Shorten the process?  Mmm.  Save some time?  Sure.  In an attempt to impact our speed-to-hire metrics, temptations abound.

And that's why I dig the Brad Stevens philosophy of life:  #IntegrityMatters, and, #ItsNotAboutMe.

It's about centering your passion around something much bigger than a single teammate.  It's about not taking a day off.  It's about hard work. Discipline.  Focus.  Details.  Brad Stevens is a coach after the heart of John Wooden.  Wooden believed "talent" was secondary to "hard work," and his words still preach to the choir called Brad Stevens.

If it was as easy as being "detail-oriented," I suppose we'd have hundreds of coaches cut from the same cloth.  But being a coach or recruiter-of-detail, isn't enough.  If the heart that's pumping beneath the coach's navy blazer isn't committed to the philosophy of #DoHardThings, then cutting corners will become a way of life.  Same for the recruiter - the plumber - the preacher.

I think everyone of us will agree on this:  the hardest things are often the smallest things.  In their book, "Do Hard Things," Alex and Brett Harris outline five reasons why the "small things" are so difficult:


It's tempting to cut corners if we believe nobody is watching, and, if the work seems menial and comes with the promise of returning the next day.  But the way one lives and works - day in / day out - is the stuff that makes us who.we.are.

So, recruiter, who are you?

In our winning and our losing, our work - every requisition - email - phone call - text message - offer letter - is a reflection of who we are, who we represent, and what we do.

Here's hoping that #IntegrityMatters to you too,