Blogosphere: "The Report of My Death Was an Exaggeration"

If only Mark Twain had been alive during this blogging heyday, his quote might have been directed at the blogosphere, rather than himself.

Alas, do not despair - his post had nothing to do with an emergency room situation that would later involve a coffin.

Rather, that while the share of the online population that tried blogging peaked in January 2005 at 10%, it has hovered since at 8%.

However, mP also noted that blog readership is climbing, and that data from Pew (last year) suggests 40% of the online population has read a blog at least once.

But I still wish I could have seen Mark Twain in full blogging regalia.

Wow, just think of the posts he would have cranked out by late evening candlelight.

Hmmm...now I can't stop myself from asking, 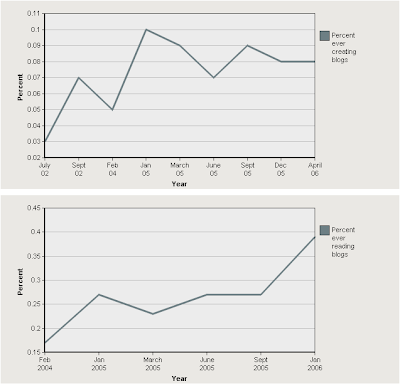