Snowballs and Mudrooms (in Texas?) 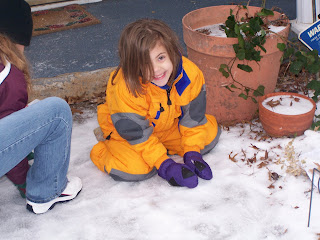 The Smith kids got a freebie today.

Running a bit late, we bolted out the front door this morning headed for school - only to stop COLD in our tracks...the streets were filled with snow (and ice)!

Not sure what we were thinkin', but we'd obviously not turned on the tv or checked weather.com this morning (as I normally do).

If I had, I would have known that all schools were closed (yep, it doesn't take much in Texas).

Dancing and screaming ensued (the kids of course).

Only two hours later, this is what the entry in our house looks like: 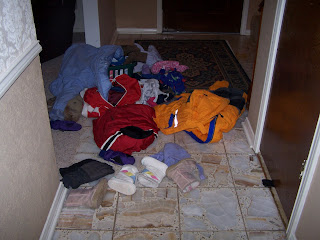 No more dancing, and the screams are not filled with glee (at least for mom 'n dad).

Geez, if we only had a mud-room.

I think mud-rooms are common in Jason's part of the world; maybe even Joel and Dave have mudrooms.

Yikes, I dared to mention Jason, Joel, and Dave in the same sentence (wonder if the resulting traffic will crash Google's blog servers?!).

Here's to snowballs and messy fun,

Dennis
WirelessJobs.com
Posted by Dennis Smith at 10:49 AM