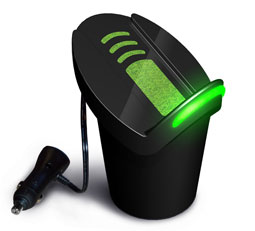 I'm outta control...this will be the second post today where I've used the word "sweet." But, hey, this is sweet.

A Michigan company is ready to launch a new way to charge portable devices - using no power cord.

Cellphones - iPods - and gadgets galore would get rejuiced by simply resting on the central console in a car or on the desktop at a home office.

This summer, Visteon, a maker of auto electronics, will start selling a base-station-like insert for a car's cupholder.

A cord will run from the charger to the car's 12-volt outlet (where we used to plug in cigarette lighters). Adapters called iGo from Mobility Electronics will attach to devices, which will allow them to drop onto the base station for recharging.

In a year or so, replacement batteries from Motorola will integrate half the charging mechanism into a cellphone, and automakers soon will install the other half into central consoles or glove boxes, says Melvin Sarnowsky, who manages the wireless charging program at Visteon.