5 is Our New Lucky Number 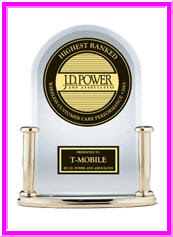 Here's some not-so-shocking news (if you work at T-Mobile), from PRNewswire:

"For a fifth consecutive reporting period, T-Mobile ranks highest among the five largest wireless service providers by creating a positive experience among
customers who contact the carrier for service or assistance."

In overall customer care performance, T-Mobile ranks highest among all wireless
providers, significantly above all of its competitors and the industry average.

T-Mobile ranks significantly higher than the industry average in customers experiencing a hold time of two minutes or less.

T-Mobile ranks highest among all wireless providers in the Walk-In retail segment of the study and is significantly above the industry average in four out of eight variables, including customers’ experiencing a wait time of four minutes or less.