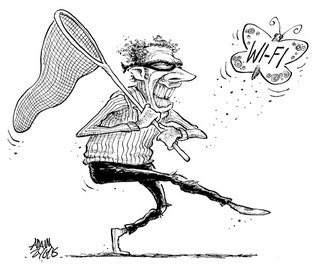 As more networks come online, many small businesses and residents are sitting ducks for preying hackers.

The advent of wireless computer networks has made it more cost-effective for homes and small and medium-size businesses to link up their computers. It might cost $400 per computer to link them in a wired network, but anyone can set up a small wireless network by purchasing an antenna and a Wi-Fi card for about $225.

But with the technology comes the danger that unwelcome visitors can glom on. Flannigan, of Trident Networking of Wilmington, said many businesses and homes are sitting ducks for hackers. All it takes to hack into an unprotected network is a laptop, a Wi-Fi card, and the will to search around.

A wireless signal goes anywhere from 200 to 500 feet, Flannigan said. Even in a single-family home on a grassy, tree-lined street, neighbors on either side are often within that zone, he said.

That signal is an especially tempting target for people in automobiles, Flannigan said. It's becoming more common for hackers to drive down the street, two to a car, one driving slowly, the other using a laptop to search for a signal. Once they find one, they can pull over and see how much information they can retrieve.

Having an unprotected network is like installing a live phone jack onto the outside of one's building, said Andrew Berkuta, who describes himself as a "senior security evangelist" for the antivirus and security software company McAfee.

No one's 100 percent safe, but there are three steps wireless network users can take to make it "extremely difficult" for a hacker to find their network, much less hack in, Flannigan said.

"You can block it each step of the way," Flannigan said.

•Each wireless network comes with a default name, which is automatically broadcast, and is picked up with Wi-Fi cards. Users should rename their network from the default, which is often the name of the company that created it, like Linksys or Netgear. Then turn off the function that broadcasts the name.

•Encrypt your network, requiring a unique "pass-phrase" to get through. Anyone without the pass-phrase might be able to see that your network is there, but all Internet communication would be garbled. It's important to guard the pass-phrase, so don't put it on a Post-it note left out on a desk.

•Use a firewall, which blocks anyone who manages to get onto your network from seeing your personal information on your hard drive. Many newer devices have a firewall already installed.