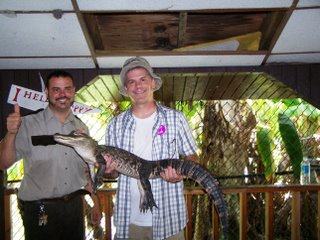 Yes, I know what you're thinking. Who's the haggard-lookin' homeless guy holdin' Snappy the Alligator? Right? Well, that would be yours truly. The Everglades Tour that preceded this photo forever changed my mind about Texas and it's so-called "heat."

Pictures from the preconference Everglades tour will be posted later. And, yes, I actually got to hold Snappy the Alligator - I just didn't buy the t-shirt.

Sorry Jason - couldn't make the breakfast session due to an overloaded email inbox. However, I'll be at the Jobster dinner tonight.

We're kicking off at 9am with Seth Godin (anybody ever heard of him?). Nice snag, Manaster.

We'll have pic's and cool stuff up later.

Dennis
Posted by Dennis Smith at 7:29 AM