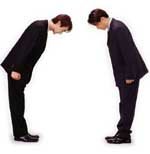 Last year, I was having lunch with a senior-level VP candidate interested in joining our company (Samsung Telecommunications). We were joined by the President and the CFO of Samsung Telecom, and were dining in a nice Italian restaurant.

Halfway through the meal, I listened intently as the candidate answered questions from the President with regard to work history. Keeping my eyes fixed on the candidate, I slowly reached down and raised my glass of iced tea, nodding all the while in response to the candidate's answers.

As the glass hit my lips, my eyes nearly popped out of my head - this was not my glass of iced tea, but rather, the candidate's half-consumed glass of ice water! It was all I could do to keep from gulping loudly in disgust (no I'm not a germ freak, but c'mon!).

Looking up from the table, I caught the eyes of our astute waiter and this guy was on it. In less than 10 seconds he replaced the candidate's water, smiling smugly as sneaked away with the "tainted" glass. The candidate was none the wiser.

Or was he? I'm sure somewhere in the blogosphere there's a Telecom-VP blogging about the half-witted recruiter that decided to sample his beverage mid-interview. At least he was kind enough to let it pass without mention.

Don't assume I'll be so kind should we happen to share an interview table one day. Reach for my iced tea and I'm liable to stab your paw with my fork.