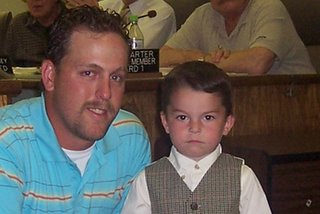 Score one for the good guys.

Curtis Swanner, a T-Mobile engineering field technician, recently witnessed a carjacking in progress and stepped in to help.

On Feb. 18, Curtis stopped by a convenience store on his way home. A car cut him off in the parking lot and raced out onto the street. “I saw this guy running after it, yelling ‘My car, my kid,’" Curtis says.

Swanner tore out in pursuit of the stolen car. Police think the two thieves saw Curtis, because after a few blocks they ditched the car and ran.

As Curtis called police to tell them where he and the stolen car were, he saw there was a boy, 3-year-old Caden Barnes, asleep inside. Swanner stayed with Caden until police and his parents arrived.

Based on Swanner’s descriptions of the thieves, police brought in one suspect. Police in Del City, Oklahoma, credit his fast action in helping to rescue Caden.

This past Monday, Curtis was reunited with Caden, who attended a ceremony where Del City’s mayor gave Curtis an award. Curtis reports that Caden is doing just fine. Because he slept through the whole event, he didn’t suffer any trauma.

Way to go, Curtis. I'm glad you are on my team.