Bracing for the Home Phone Revolution 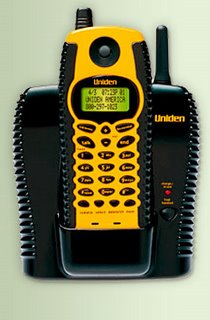 At a time when many of us are abandoning landlines, the design of home phones is evolving.

In 2007, Motorola, plans to start using batteries it currently uses in its famed RAZR mobiles in its home phones. The smaller, flatter battery will allow for thinner home phones. It will also allow new Motorola home phones to come fully charged.

Not since the introduction of the cell phone has the plain old home phone been in for such upheaval. The device long used for recording voice mails, and storing phone lists may find itself replaced. In its stead: one of many cordless devices, from makers including Netgear, Uniden, and Thomson, that let users make low-priced Internet calls, view photos and video, and browse the Web.

Read the complete story at Mobile Tech Today, HERE.
Posted by Dennis Smith at 9:43 AM