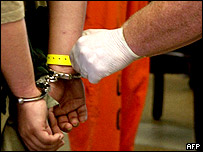 It's a good thing I live in Texas. Geez. If the state of Texas had the same standards as Singapore, regarding wireless network piggybacking, my children would have already waved goodbye and the lawmen would have slammed shut the door to my jail cell.

Unfortunately, this teen lives next door to the Singapore version of Archie Bunker. And, he's been charged with tapping into someone else's wireless Internet connection, a crime that carries a penalty of up to three years in jail, a newspaper reported Saturday.

Garyl Tan Jia Luo, 17, is the first person to be charged with this crime under the Computer Misuse Act, the Straits Times reported.

The report said Tan is accused of using a laptop computer to gain unauthorized access to a home wireless network on May 13.

The newspaper said a neighbor had apparently lodged a complaint against Luo.

Source: The Age.com.au
Posted by Dennis Smith at 8:31 PM