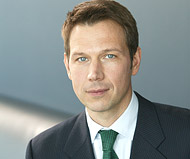 At a meeting yesterday the Supervisory Board of Deutsche Telekom decided to appoint René Obermann as the new Chief Executive Officer with effect from November 13, 2006. The 43-year old will succeed Kai-Uwe Ricke.

The chairman of the Supervisory Board, Dr. Klaus Zumwinkel, said:

"René Obermann is a strong entrepreneural leader with over 20 years experience in an industry that is characterised by fast technological changes and constant new challenges in the market. His career has a strong international influence, particularly through the successful internationalization of T-Mobile..."

René Obermann, born in March 1963 in Düsseldorf, Germany, became a Member of the Board of Management of Deutsche Telekom AG, responsible for T-Mobile, in November 2002. Since December 11, 2002, he is also CEO of T-Mobile International AG & Co. KG. After completing a business traineeship with BMW in Munich between 1984 and 1986, Obermann set up the business ABC Telekom in Münster, Germany.

In 1991, he became Managing Partner of Hutchison Mobilfunk GmbH, successor of ABC Telecom, and in 1993 until 1998 Chairman of the Management Board. Obermann was also Chairman of the former German Association of Mobile Communication Service Providers in 1995 and 1996. Between April 1998 and March 2000, René Obermann was Managing Director Sales at T-Mobile Deutschland.