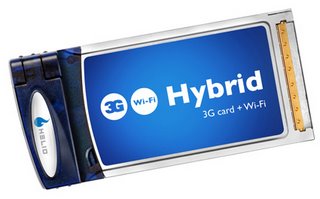 A Boingo pass for when you're near a hotspot, EV-DO for when you're not. That's the gist of Helio's latest product, dubbed "Hybrid" -- only their third since launching earlier this year -- and the first dedicated to data device from the MVNO (and among the first data devices from any MVNO, so far as we know). Technically, Hybrid is more of a package than an actual device, composed of a rebranded Sierra Wireless Aircard 580, EV-DO service, and WiFi access (provided by Helio pal and Sky Dayton venture Boingo, of course) with Helio's "Hybrid Connector" software calling the connectivity shots. Though the concept doesn't seem to go after the same core demographic as the MVNO's handsets, the $85 package deal could still be a compelling one for folks that maintain separate WiFi and 3G data accounts. Look for Hybrid to be available for a nice, round $0 on two-year contract through Fry's locations and Helio's site directly.
Posted by Dennis Smith at 9:47 AM