Put an end to the horse whispering...check out the T-Mobile Blackberry 8700g 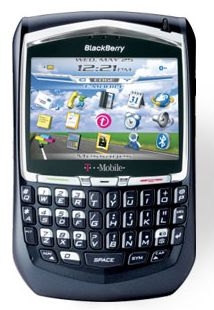 I'm a user.....a Blackberry user (7105t). I like the phone but the whole voice quality distortion thing stinketh.

I'm also a loud talker. So it took me a while to get used to speaking in hushed tones. My brother thought he was going to have to crawl through the phone and smack me in the kisser to get me to "pipe down."

Here's the problem with the 7105t - anything that comes close to being "normal" (as far as the voice volume is concerned) is horribly distorted on the other end of the phone.

The problem is that I'm a passionate-kinda-guy. It's hard to interview a candidate using my 7105t because the passion just doesn't come through as well when I'm speaking with a hushed tone to my voice. It's the same kind of sound I get when I'm at my wits end with our two-year old who's two hours past her bedtime and still kicking the crib and asking for a "cuppa miwak." That's "cup of milk."

If I go with the 8700g, I'm at least hoping my hard earned $$'s can resolve my Horse Whispering situation. It's really getting annoying.

Anyway, here's the last sentence of the complete Gizmodo review:


"Really, on the whole, I liked the 8700g quite a lot. I could imagine getting a wee bit possessive of it had I been using it in the context of a more BlackBerry-friendly email account, one with junk mail filtering and folders that the unit could understand. It’s definitely worth a look for most folks, which is higher praise than I can give to most mobile devices."
Dennis Smith
T-Mobile Recruiting
Posted by Dennis Smith at 4:05 PM